Peer to peer – Patient to patient

Toolkit Content
A collective of knowledge, experience, and wisdom distilled from the globally connected patient and caregiver communities. Vital information from those who have successfully navigated their way back to good health.

Successful patients share common traits and decisions.
Mastering the following topics (in priority order) has lead them to the best outcomes.

Note: re Molecular Profiling of a biopsy (by a Laboratory)
This is also described as –

Caregivers are an essential factor in successful cancer outcomes.
Characteristics to consider when choosing a caregiver.

Oncologists specialize in specific cancers – Find your match.
Characteristics to consider when choosing an Oncologist that best fits your exact diagnosis.

Often the best Hospitals are frequented by the best Oncologists.
Characteristics to consider when choosing a Hospital

Knowledge empowers choices and improves outcomes.
It all begins with an open mind and a willingness to learn what you do not know.

Please Note: IHC Testing and Molecular Profiling have approximately 93% correlation in results for PD-L1 and MSi-high.

Science fact is saving lives
If you are unable to obtain a biopsy of  your solid tumor consider a “Blood Biopsy.” Blood, biopsies are constantly improving in scope and consistency of results.

Join a Cholangiocarcinoma Group on Facebook, engage with others who are like you. Our groups have considerable patient and caregiver experience and are connected worldwide. Asking a dumb/awkward question will set you on a journey that will empower your choices.

Our goal is to equip every “Newly Diagnosed Patient and Caregiver with this Cancer Tool Kit for Patients.
CAN YOU HELP US ACHIEVE THIS? Please share

Terms used in the order of appearance
Note: The medical community language and description are not always in sync. Different names and terms are used. This is confusing to the patient and caregiver, we try our best to overcome this.

Caregiver
The person who helps you function on an everyday basis

Advocate
People who can speak up, advance the patient and caregiver questions, and generally support the effort. Often patients and their Caregivers have several advocates who have different skills

Clinical Trial
Clinical trials are a type of research that studies new tests and treatments and evaluates their effects on human health outcomes.

Tumor
Tumors are a mass of tissue that’s formed by an accumulation of abnormal cells. Normally, the cells in your body age, die, and are replaced by new cells. With cancer and other tumors, something disrupts this cycle.

Primary Tumor
This is the original tumor location

Biopsy
This is a tissue sample that is obtained from the actual tumor.

Immunohistochemical – IHC
A test that stains the biopsy sample with a chemical solution to highlight the presence of known biomarkers.

Biomarkers
A biological molecule found in blood, other body fluids, or tissues that is a sign of a normal or abnormal process, or of a condition or disease. A biomarker may be used to see how well the body responds to a treatment for a disease or condition.

Immune Checkpoint
The Immune Systems killer T Cell has a failsafe switch to turn off any accidental attack on a healthy cell. Cancer has learned how to turn off this switch and continue growing.

Immune Checkpoint pathway
The Immune Checkpoint pathway refers to the interaction between the killer T Cells and the surface of a normal cell. The T Cell has a PD-1 ligand on its surface and a healthy cell has a PD-L1 ligand on its surface (a matching pair), when these two meet and interact it turns off the unwanted T Cell attack – Cancer has learned to hide behind this by expressing PD-L1 when a T Cell approaches.

Immune Checkpoint Inhibitor -ICI
This is an immunotherapy drug – a monoclonal antibody designed in a laboratory that interferes with the T Cell’s “Checkpoint Switch” by locking in the “On” position, so the T Cell can continue and illuminate the cancerous tumor.

Keytruda
Keytruda is a monoclonal antibody created in a laboratory and infused into the patient.  Keytruda is not a chemotherapy treatment.

Monoclonal Antibodies
Monoclonal – means they are designed to perform a single purpose or task.

Immunotherapy
Think of immunotherapy drugs as specially designed actions that interfere with what is driving the tumor growth. A lot like a computer has code that goes wrong and a new “patch’ or string of code has to be added as a workaround. Immunotherapy is being referred to as the first ever cancer cure – a modern-day penicillin moment in history.

Monoclonal
Simply this is an antibody designed in the laboratory to perform one single function/purpose.

Molecular Profile
This is a comprehensive examination of a biopsy sample. It examines the genetic and genomic makeup of the sample provided.

Genetic
Genetics is a term that refers to the study of genes and their roles in inheritance – in other words, the way that certain traits or conditions are passed down from one generation to another. Genetics involves scientific studies of genes and their effects. Genes (units of heredity) carry the instructions for making proteins, which direct the activities of cells and functions of the body. Examples of genetic or inherited disorders include cystic fibrosis

Genomic
Genomics is a more recent term that describes the study of all of a person’s genes (the genome), including interactions of those genes with each other and with the person’s environment. Genomics includes the scientific study of complex diseases such as cancer because these diseases are typically caused more by a combination of genetic and environmental factors than by individual genes. Genomics is offering new possibilities for therapies and treatments for some complex diseases, as well as new diagnostic methods.

The advantages of an IHC – Immunohistochemistry test

Keytruda, combinations and side effects

B Cells
B Cells have 2 primary functions (1) Produce the ‘antibodies’ and (2) Produce memory cells for any future threats.

CTLA-4
A Check Point protein that sits on the surface of the T Cells. They prevent mistake attacks on healthy cells.

IHC
Immunohistochemistry test chemically stain the tissue biopsy looking for a response that indicates the presence of PD-L1, MSi, HER2 that are known match’s for current Immunotherapy treatments.

Ligand
An elongated strand of protein receptor that anchors to a cell surface. (ie PD-L1 is a Ligand receptor)

Nucleotides
Nucleotides are the repetitive strings of DNA code that make us – us. example of a code  string;  “AAAAA or CGCGCGCG”  (codes are short tandem sequences that replicate)

MSI
Is a measure of Microsatellite Instability

MSI-LOW
Is a low recorded measure of Microsatellite Instability.

MSI-HIGH
Is a high recorded measure of Microsatellite Instability.

MSS
Is  Microsatellite Stable, which means no instability is present

MMR
Mismatch Repair is the DNA repair pathway that plays a key role in maintaining our genomic stability. MMR is our “Spell Checker” correcting any errors in our DNA replication process as they occur.

MMR
Is made up of 4 proteins (MLH1, MSH2, MSH6, & PMS2 )
Think of MMR as our bodies DNA Spell Checker – DNA replication often goes wrong and the MMR genes correct this.

dMMR
Deficient Mismatch Repair means that one or more of the 4 MMR proteins absent and as a result, the MMR is not functioning correctly and is described as deficient
Think of dMMR as our bodies DNA Spell Checker that has become broken and as such is letting DNA replication mistakes continue unchecked.

PD1
Is an Immune Check Point Inhibitor – its function is to switch off a T Cell attack. It does by binding and communicating with the PD-L1 anchored to a cell surface.

HER2
Is a growth receptor gene often found on the surface of breast cancers cells – too many receptors cause cells to grow and divide too quickly, Immunotherapy treatments have shown positive results in blocking this growth pathway.

The Globally Connected Patient has become a critical tipping point in realising the cancer cure. A peer-to-peer patient and caregiver collective, the informational sum of Experiences, Knowledge, Wisdom, and more importantly real-time treatment results. This is something that the international medical community cannot do.

A modern phenomenon unfolding via the power of targeted social media, unclogging, and delivering “TODAY’S breakthrough results TODAY! – Highly Targeted knowledge delivered into the hands of those most in need -“The Newly Diagnosed Patient and Caregiver”

We sincerely hope that the information on this page leads you and your family back to solid ground and happier outcomes,

Which test is best for MSI and PD-L1 testing

What are MSi-high /dMMR Cancers

In normal cells, a system called DNA mismatch repair (MMR) corrects errors that occur during DNA replication. Defects in MMR can lead to microsatellite instability-high (MSI‑H), which can be found in many types of cancer. MSI‑H or mismatch repair deficient (dMMR) tumors have accumulation of errors in genetic sequences that are normally repeated (called microsatellites)

HOW A TEST FOR MSI‑H/dMMR WORKS

Important View Immuno 101
Everyone’s cancer is different. To help develop a treatment plan that’s right for you, your doctor may order laboratory tests. These tests can evaluate your tumor for different biomarkers, including MSI‑H or dMMR. Some biomarkers are used to help select patients that may benefit from certain treatments, such as KEYTRUDA. Talk to your doctor to see if a laboratory test for the MSI‑H or dMMR biomarker is right for you.

What are PD-1 and PD-L1 biomarkers

Important View Immuno 101
The immune system is your body’s natural defense against disease. The immune system sends certain types of cells called T cells throughout your body to detect and fight infections and diseases—including cancer.

PD-1 and PD-L1 are types of proteins found on cells in your body. PD‑1 protein is found on immune cells called T cells. It normally acts as a type of “off switch” that helps keep the T cells from attacking other cells in the body. PD-1 attaches to PD‑L1, a protein found on some normal (and cancer) cells. This interaction basically tells the T cell to leave the other cell alone and not attack it. Some cancer cells have large amounts of PD‑L1, which helps them hide from immune attack.

Therapies that target either PD-1 or PD-L1 can stop them from attaching and help keep cancer cells from hiding.

Learn more about KEYTRUDA, a type of immunotherapy that works by blocking the PD‑1 pathway.

KEYTRUDA can cause your immune system to attack normal organs and tissues in any area of your body and can affect the way they work. These problems can sometimes become severe or life-threatening and can lead to death. These problems may happen anytime during treatment or even after your treatment has ended.

The primary origin of the tumor will define.

Every Cholangiocarcinoma diagnosis has an origin location, this is referred to as your Primary Tumour.
There are two general primary locations.

The Extrahepatic Primary is further defined as per the diagram below. 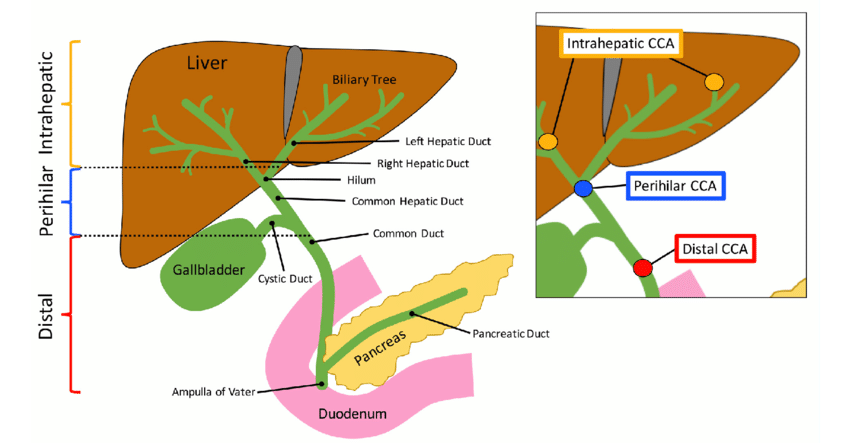