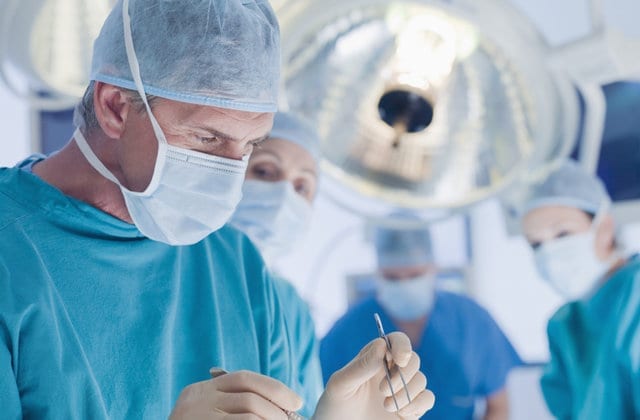 There are 2 general types of surgery for bile duct cancer: potentially curative surgery (resectable and unresectable) and palliative surgery.

Only a small percentage of bile duct cancers are resectable when they’re first found.

If potentially curative surgery is being considered, you may want to get a second opinion or even be referred to a large cancer center. Nearly all doctors agree that surgery offers the only realistic chance for curing people with bile duct cancer. But there are differences of opinion about how advanced a bile duct cancer can be and still be treatable with surgery. The surgery needed for bile duct cancer is often complex and requires an experienced surgeon. These operations are most often done at major cancer centers.

If a tumor is unresectable, it means doctors think the cancer is too advanced, it has spread too far, or is in too difficult a place to be entirely removed by surgery.

Laparoscopy to plan bile duct surgery
If your surgical team is planning curative surgery, they first may do a laparoscopy (a type of minor surgery) to look for any spread of the cancer that could make curative surgery not an option. This procedure is described in Tests for Bile Duct Cancer. During the laparoscopy, the surgeon can look for areas of cancer that did not show up on imaging tests. If the cancer is resectable, laparoscopy can also help plan the operation to remove it.

Surgery to remove bile duct cancer can have serious side effects and, depending on how extensive it is, you may need many weeks to recover. If your cancer is very unlikely to be curable, be sure to carefully weigh the pros and cons of surgery or other treatments that will need a lot of recovery time. It’s very important to understand the goal of any surgery for bile duct cancer, what the possible benefits and risks are, and how the surgery is likely to affect your quality of life.

Surgery for resectable bile duct cancers
For resectable cancers, the type of operation depends on where the cancer is.

Intrahepatic bile duct cancers are in bile ducts that are inside the liver. To treat these cancers, the surgeon cuts out the part of the liver containing the cancer. Removing part of the liver is called a partial hepatectomy. Sometimes this means that a whole lobe (right or left part) of the liver must be removed. This is called hepatic lobectomy and is a complicated operation that requires an experienced surgical team. If the amount of liver removed is not too great, the liver will still work normally because it has some ability to grow back.
Perihilar bile duct cancer develops where the branches of the bile ducts first leave the liver. Surgery for these cancers is complicated and requires great skill. Usually part of the liver is removed, along with the bile duct, gallbladder, nearby lymph nodes, and sometimes part of the pancreas and small intestine. Then the surgeon connects the remaining ducts to the small intestine. This is a complex operation that can lead to life-threatening complications for some people.
Distal bile duct cancers are further down the bile duct near the pancreas and small intestine. Along with the bile duct and nearby lymph nodes, the surgeon often has to remove part of the pancreas and small intestine. This operation is called a Whipple procedure. Like the other operations, this is a complex procedure that requires an experienced surgical team.

Liver transplant
For some people with early stage, unresectable intrahepatic or perihilar bile duct cancers, removing the liver and bile ducts and then transplanting a donor liver may be an option. In some cases it might even cure the cancer. But getting a new liver may not be easy. Not many centers accept patients with bile duct cancer into their transplant programs. Also, few livers are available for patients with cancer because they tend to be used for more curable diseases. People needing a transplant must wait until a liver is available, which can take too long for some people with bile duct cancer.

One option might be having a living donor (often a close relative) give a part of their liver for transplant. This can be successful, but it carries risks for the donor. Another option might be to treat the cancer first with chemotherapy and radiation. Then a transplant is done when a liver becomes available. Clinical trial results using this approach have been promising.

Like other surgeries for bile duct cancer, a liver transplant is a major operation with potential risks (bleeding, infection, complications from anesthesia, etc.). But there are also some additional risks after this surgery. After liver transplant, drugs have to be taken to help suppress the patient’s immune system to keep it from rejecting the new liver. These drugs have their own risks and side effects, especially the risk of getting serious infections. Some of the drugs used to prevent rejection can cause high blood pressure, high cholesterol, and diabetes. They can also weaken the bones and kidneys and can lead to the development of another cancer. After a liver transplant, regular blood tests are needed to check for signs of rejection. Sometimes liver biopsies are also done to see if rejection is occurring and if the anti-rejection medicines need to be changed.

In some cases the doctor might think the cancer can be removed (is resectable) based on the information available (imaging tests, laparoscopy, etc.), but then once surgery is started it becomes clear that the cancer is too advanced to be removed completely. In these cases, the surgeon might still try to prevent or relieve symptoms using a different approach.

Stent placement
If a bypass can’t be done, the surgeon may put a plastic or expandable metal tube (called a stent) inside the bile duct to keep it open and allow bile to flow.

Possible risks and side effects of bile duct surgery
The risks and side effects of surgery depend on the extent of the operation and a person’s overall health before surgery. Another key factor is how well the liver is working. All surgery carries some risk, including the possibility of bleeding, blood clots, infections, complications from anesthesia, pneumonia, and even death in rare cases.

People will have some pain from the incision for some time after surgery, but this can usually be controlled with medicines.

Surgery for bile duct cancer is a major operation that might mean removing parts of other organs. This can have a major effect on a person’s recovery and health after the surgery. Serious problems soon after surgery can include bile leakage into the abdomen, infections, and liver failure. Because most of the organs removed are involved in digestion, eating and nutrition problems may be a concern after surgery.