Cholangiocarcinoma, a terminal diagnosis, that led to significant surgeries, treatments that failed, and then to a modern-day medical breakthrough in cancer outcomes.

Aneurysm:
2017 January 5th
Major Aneurysm Event to the Main Hepatic Artery – My life was now being measured in minutes to seconds. Click here to view images taken just 30 mins before I fell unconscious, and the ambulances called.

This shows the Vacpac that I was attached to me to leave the hospital after the Whipple Surgery. I developed 3 large infections which all tunneled toward each other at an alarming pace. As you can see very graphically, the pump began to suck blood from within my stomach. These pictures were taken while I was hole and Claire was struggling to cope with what was unfolding – 30 minutes after she had removed the Vacpac and cleaned me up, I fell unconscious and began vomiting up large amount of blood. 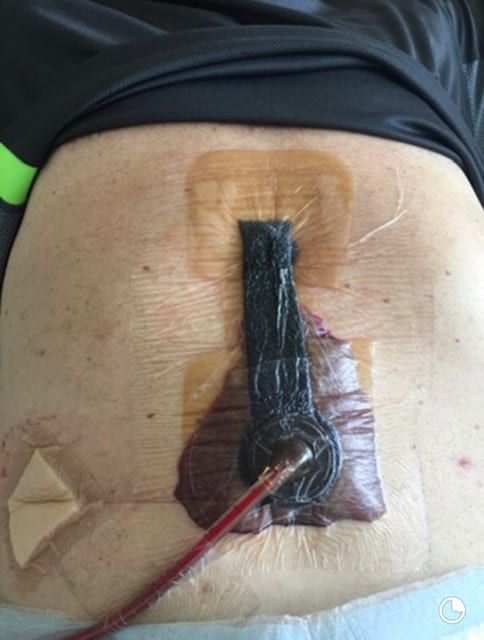 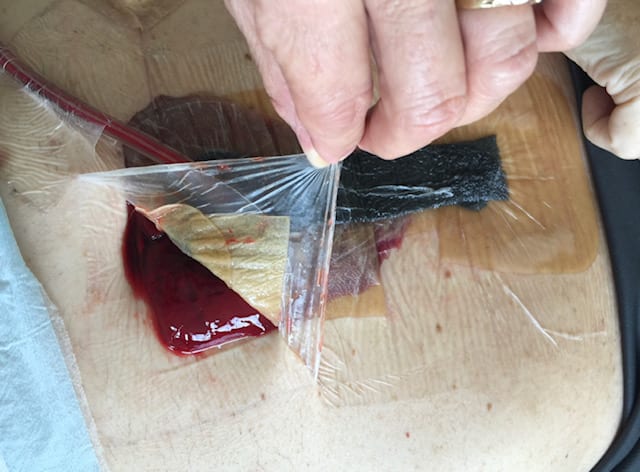 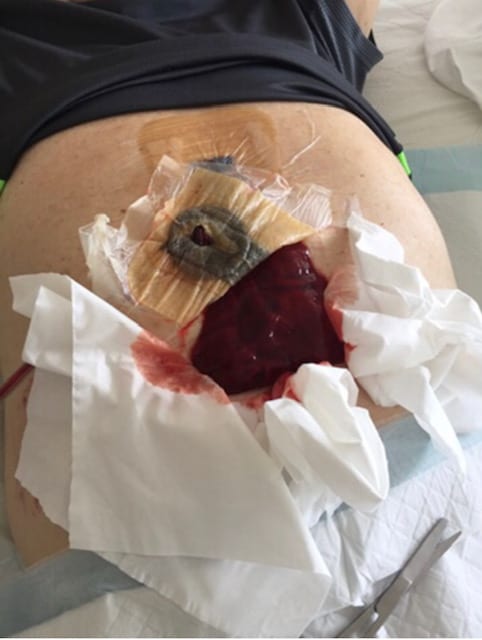 Please visit www.steveholmes.net.au/personal to fill in the gaps

Can you describe how it all began

My journey began while cycling on a Saturday morning, when a sudden fatigue set in, and I struggled for the energy to get home and onto the couch and to rest. The fatigue continued to worsen and after 5 days my stools turned a pale clay color with a yellowing of the eyes and skin set in. This was followed by severe persistent itching over my entire body.

How did receive and deal with your diagnosis?

The Surgeon that performed the endoscopy was not available to share the result of the biopsy, so we had to choose another surgeon to meet and discuss the results with.

As many will know, changing Doctors is very stressful. At that first meeting, we meet with a young woman who worked for the surgeon (Harald.) It was my understanding that we were going to discuss the removal of a blockage, but she seemed to be discussing cancer and a thing called a “Whipple”. It was only a few minutes into her prepared consultation, that Suzanne realized I had not been told that I had cancer. A very embarrassing moment for her, but an enormous abyss for me. From that moment on, Suzanne went from being very clinical to very considerate and caring.

I now had a cancer that I could not pronounce. I remember thinking very briefly- it can’t be all that bad because I had never heard of this before, but this was quickly shattered as Suzzanne outlined the scale of a Whipple op and its complications.

Too much to digest –

What medical advice and help did you seek?

My Wife Claire went to Dr Google and then immediately phoned my Doctor, which led to failed blood tests, Ultrasound, and CAT Scans within the first few days. My doctor arranged for a surgeon to immediately perform an Endoscopy to stent the bile duct blockage and reduce itching (Bilirubin Levels) At this stage the Doctor thought it was Gallstones, but also wanted a biopsy of the blockage

How did you make decisions?

Claire my wife stepped in and led the way – absolutely amazing calm and decisive, never overbearing always considerate, and allowing me the freedom to be me, and make my own decisions. We are a team and always have been so that’s how we approached the avalanches of information and overwhelm that seemed to come from nowhere.

We learned that knowing what mutations were driving my cancer’s growth, was vitally important. Cancer is an enormous dark subject, and knowing my mutations, helped screen out the avalanches of unnecessary information. It was still very scary, but less paralyzing and this helped free up my mind when making decisions.

I became very careful about what and who you let in, I was very vulnerable and fragile, the overwhelm was ever-present. My decisions were always mine, and I understood the value of having the right people in my head – this shaped how I made decisions.

How would you describe your journey?

All I wanted to see and hear was there is a way through this, I wanted evidence that others had succeeded. The medical world could not or seemingly would not give me any hope.

I had seen my younger brother go through a battle with Cholangio the Beast, only 2 years before. Graeme had taken the fight head on to Cholangio, but he became punch drunk from his effort and with no energy left, succumbed. I decided on a different tack, I created a parallel type world in my mind, a world where I embraced Cholangio the Beast. I could see myself walking alongside it, learning its ways, in the hope that I could somehow negotiate a better outcome.

There is no manual for overcoming this type of challenge, there is no right or wrong way, no tough or smart advantage, you just have to have an unconditional willingness in the absence of all hope, to simply get back up and take that next step. I learned to never question this – questioning just weakened my resolve.

My younger brother Graeme also had the exact same diagnosis in 2012. Graeme battled for just over 18 months – RIP 3rd May 2014.

This is a very rare and aggressive cancer that has a 6.8 month average survival period (excludes Liver cancer stats) – very similar to pancreatic, yet this is not hereditary.

On a lighter but serious note –

AND AS TRUE AS A ROO’S TALE

Fair Dinkum Mate – as True as a Roo’s tale
2012: I Broke my neck seriously in the GC100 Cycle Event – I was suddenly paralyzed from head to hip down my ride side for 8 months.
2013: Full recovery- My first ride in 9 months – a typical 5:00 am start in the pitch black for a “Surf to Turf ride from the Gold Coast’s coastline into the hills. As we neared the first big climb, I finally got to take my first turn at the front of our group of 6 riders, it felt great to be back! That was when “Life Happened On Me” once again – before I had time to settle in a Roo flashed out of the tree line and onto the road – I was hit head-on by a bloody big Roo. Now go figure those odds! Yet luck was somehow still on my shoulder. An angry Roo was entangled over my front wheel and handlebars, our heads clashed eyeball to eyeball for the briefest of moments before it slammed its tail into the ground and in one big bounce disappeared back into the dark tree line.

I was in shock and I could sense the panic from all behind me – I felt the confusion, concern, and fear from my riding buddies – had I broken neck again? and who was going to break the bad news to my wife Claire!  Ha !!!! I walked away with a black eye a busted bike and a bloody big Roo Story! 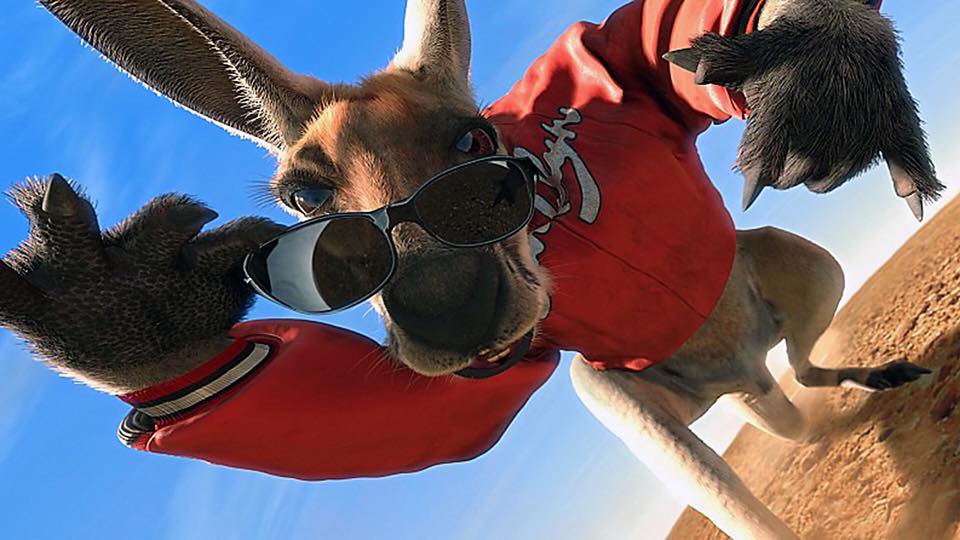 These were and still are my inherent and dominant thoughts.

“Anything and Everything is possible, while you remain open to its reality. It’s your “Willingness Beacon” so that Opportunity and Luck can always find their way to you” – Sagh –

“My reality is my reality and your reality is yours” – this distinction and understanding became a critical component in preserving my sanity, and seeing through the statistics and those who believed in them.

Looking back, at my “thoughts” in the midst of extreme stress and chaos, and how I chose to act on them (the “thinking”) provided significant lessons in the opportunity of life. I had no idea as to the quality of my “Thought to Thinking” process at that time – who would. But with hindsight, I can now see with clarity that the “Mind” really does try to lead our body back to safety. Thoughts are the first ally, thinking upon those thoughts is the second, and listening to them is the third ally. I unknowing allowed this to flow and lead me – without this, I would not be here now.

Cholangiocarcinoma sneaks up from behind. 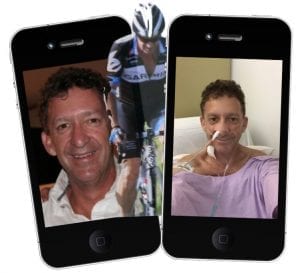 In 2016, little did I know that I was fast approaching the climb of my life, Cholangiocarcinoma typically only reveals itself when it is very advanced, throwing you into a fight or flight mode – for me it was very paralyzing, for a time I could do neither.

An Aneurysm that nearly beat Cholangio to the punch!

MAIN HEPATIC ARTERY
These pics are one month post Whipple. At home.

They show the “Vac-Pac” seals that were applied to extract infection fluids from my surgery incision wounds. The machine began sucking up blood which collapsed /blocked the vacuum machine from operating, so Claire had to disconnect and remove.

Neither Claire or I  realised just how serious this was or what was about to happen.

Finally free from the contraption that had me tied to the hospital and cancer like an umbilical cord, I felt great in the context of still being in a lot of pain from my Whipple surgery. But less than one hour after these shots were taken, I fell unconscious and began vomiting up blood.

Claire had to be the magician and put me into a recovery position and dial for an ambulance at the same time. I woke up in emergency where I violently projectiled up over 50 % of my body’s blood in approx 30 seconds. I was now fighting for my life and it all came down to just seconds. 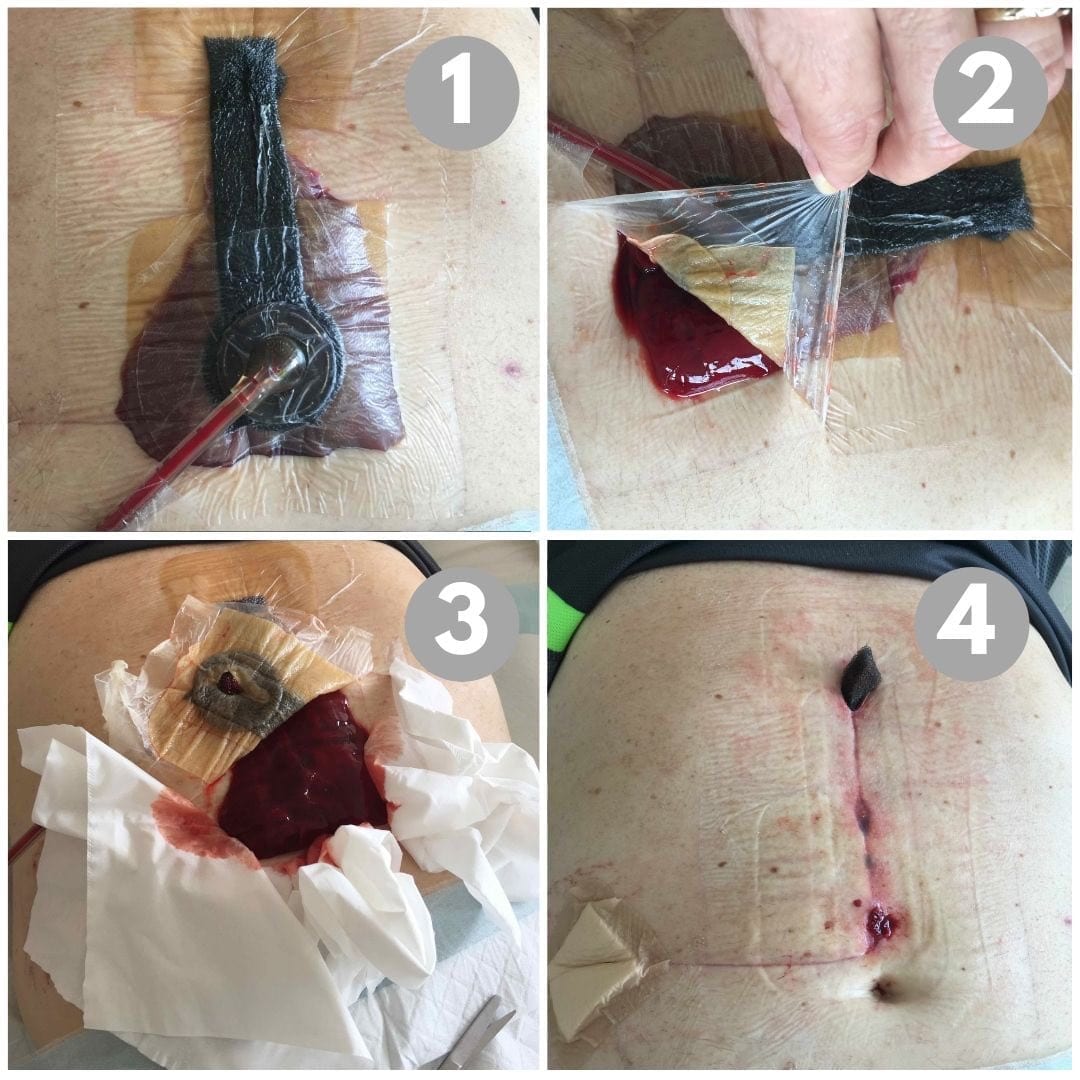 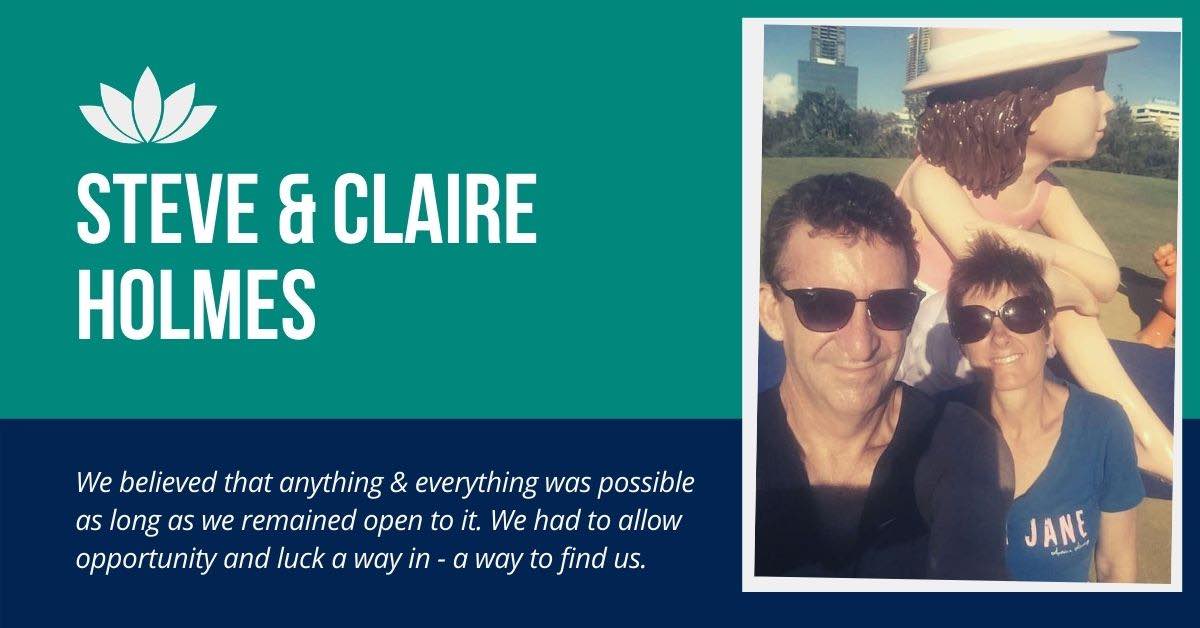 You seem like a real trooper
My mum diagnosed Nov 2018
Stage 2
IH in bile duct
We opted to go “nothing”
She is okay
Weight loss
And fatigue
No jaundice but we have s stent
Has no appetite
We are using cbd and RSo
Did you try any of this?

Hi Harry re the CBD – I went downhill extremely quickly and was confined to Hospital, Surgical and Oncology interventions, so I was never stable enough to consider CBD or other natural pain treatments. I too lost a lot of wight could not eat and barely had the energy to keep my eyes open for long periods. I hope your Mum can keep her strength up, and any pain measures that can help this is good as the body (and mind) needs a break when fighting this.