Cholangiocarcinoma is a bile duct cancer that forms in the lining of the Bile Ducts.
Join Group | Join Updates | Patient Toolkit

We are here to help you help yourself, so let’s start by learning the basics together 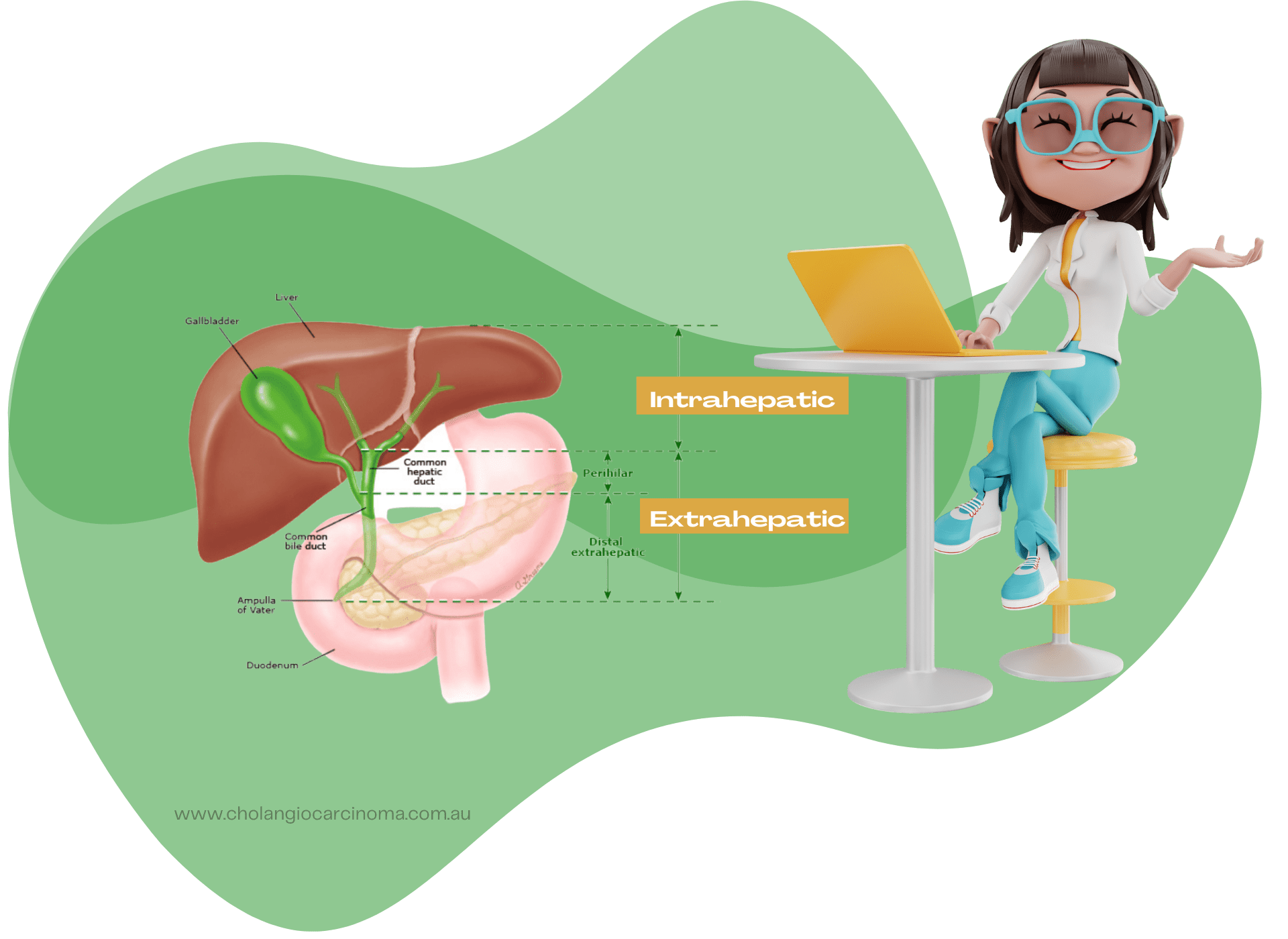 Cholangiocarcinoma is a cancer that forms in the lining of the Bile Ducts.

Bile ducts begin in the liver like the source of a river with tributaries that combine into one common duct outside the liver. 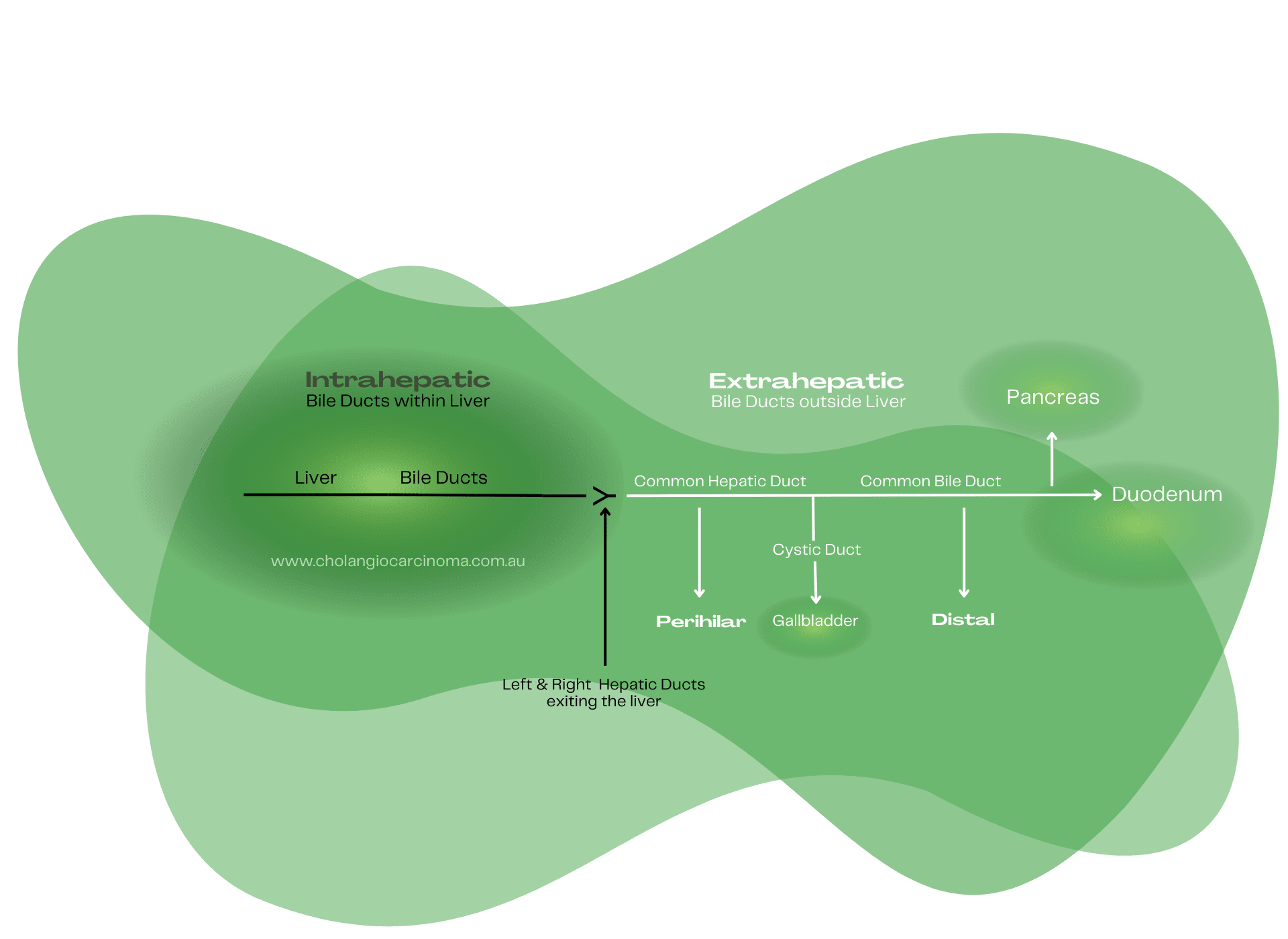 Knowing the primary location will help you understand and learn more efficiently.

Hi there and welcome to CCA Australia.

Although we are Australian and New Zealand centric we take in the complete global view at all levels to ensure we leave no stone unturned and remain current and effective at the coalface of this cancer challenge. We are here to help support your efforts in achieving the best possible outcomes.

We strongly recommend that you immediately form a basic knowledge foundation before you proceed – we are here to help you with this.

It is our goal to help you, help yourself. Knowledge and Sharing are our greatest and most potent resources in succeeding in such challenges, so let’s now move forward together and familiarise ourselves with the CCA Patient Toolkit ~ CCA is the Cholangiocarcinoma abbreviation.

Regards Steve
Ps Please join our “Email Updates” this is where we keep you current with what we know, the updates are also a helpful alternative if you do not use Facebook.

What can you do to help yourself?

(1) CCA Patient Toolkit: Ensure you tick off every step, they are what successful patients and their medical teams adhere to.

(2) Surgery: Full resection of the primary tumor provides the greatest curative outcomes, ensure you have fully pursued this option.

(3) Mutations: Your number one priority is to discover your cancer mutation(s).

The future of Cancer treatment is treating the actual mutation(s) that is driving the cancer’s growth. Therefore discovering the mutation(s) responsible is paramount to a patient’s outcome. When your Oncologist receives this information it shines a light on how to specifically target, treat and eliminate the mutational culprit (s) and the cancer they create. Without this knowledge, your oncologist will remain in the dark relying on historic first-line treatment options.

Many cancer deaths are caused when cancer moves from the original tumor and spreads to other tissues and organs. This is called metastatic cancer. This animation shows how cancer cells travel from the place in the body where they first formed to other parts of the body.

The results of diagnostic and staging tests are used to find out if cancer cells have spread.

The process used to find out if cancer has spread to other parts of the body is called staging. For bile duct cancer, the information gathered from tests and procedures is used to plan treatment, including whether the tumor can be removed by surgery.

There are three ways that cancer spreads in the body.

Cancer can spread through tissue, the lymph system, and the blood:

The Globally Connected Patient and Caregiver Community provide the Collective of peer-to-peer Knowledge, Experience, and Wisdom in real time. Joining a community of your peers is one of the most significant resources you will have in your toolkit.

Have we missed your community?

We are available to help where we can. Connecting, Sharing, and Asking Questions is a very healthy start. 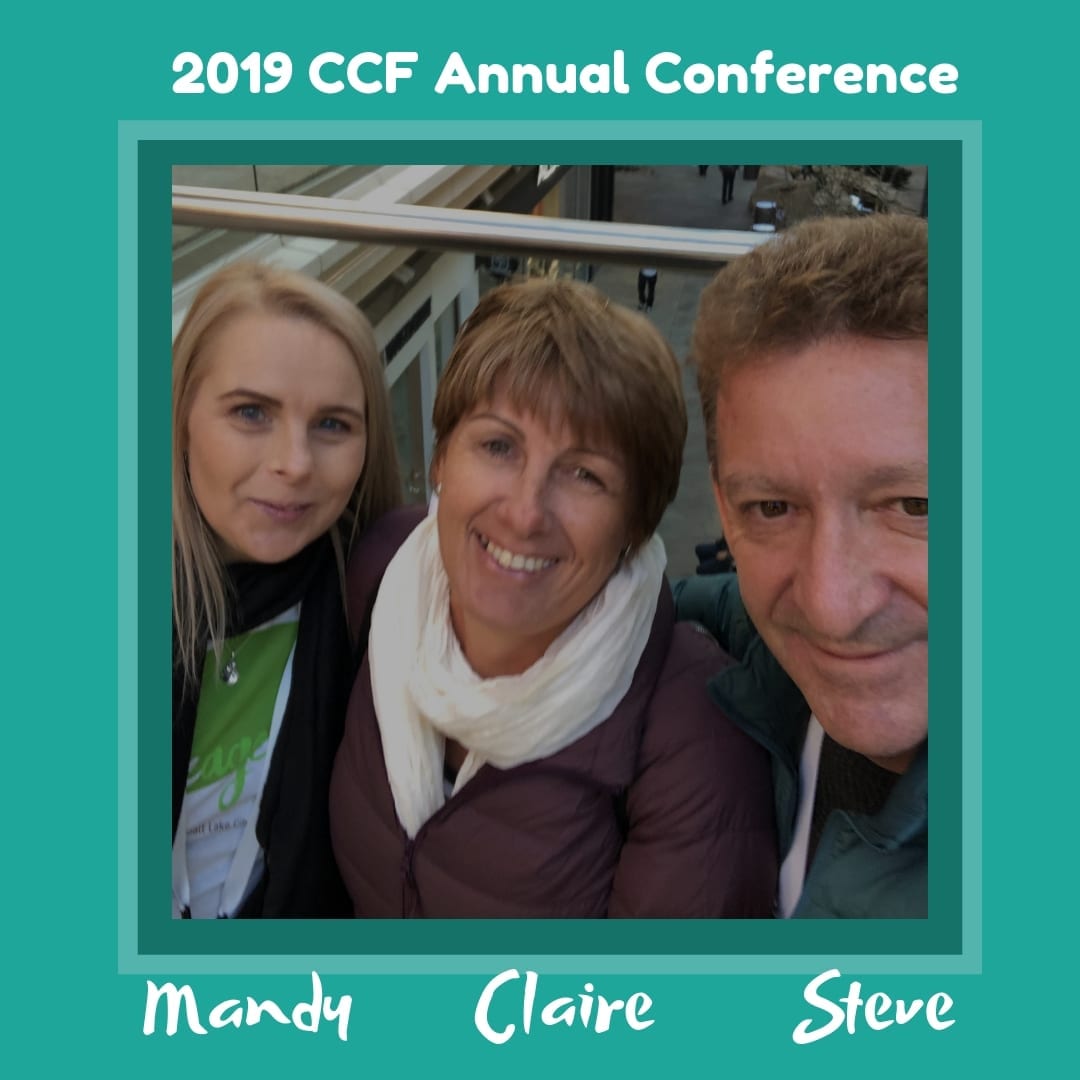 Patients that had
Chemotherapy + Surgery + Immunotherapy and now ‘NED’

Patients that had
Surgery + Chemotherapy and now ‘NED’

Improving patient survival outcomes is the only true measure.

I continue to lean into a difficult community cancer challenge in developing a Cholangiocarcinoma-specific focus here in Australia. Cholangiocarcinoma (CCA) has very specific needs at all levels from Patient to Community to Medical providers to Medical Research and the implementation of new curative initiatives. Currently, there is no formal CCA structure in place to support this effort…continue reading

The Australian Eucalyptus is both unique and inspiring.

There are no other tree species in the world that can produce timber, paper, essential oil, and even honey! The Eucalyptus is among the hardiest trees on the planet, able to biologically adapt to drought conditions, pest infestations, and regrow after fire ~ we are in good company!
Source Look through the impossible to where it could be

“The Definition of Fiction: Something imagined, a collection of thoughts that form a story not yet real – NOT YET!
YET FICTION ALWAYS PROCEEDS ITS REALITY

Not everything can be measured by the reality of others!

“To Walk on Water you must first believe that it is possible, you have to look through the impossible to where it can be, then take that next step and the one beyond that until the magic of momentum reaches out and engages lifting you up and beyond the now. Transporting you to that place where your dreams can fly free and their visions and aspirations rise up to plan their outward reality. This is how we landed on the moon, and continue to do remarkable things today, that just yesterday were impossible.”

“Hope is real, it is the architect of our dreams, and the stimulator of our innermost ‘Willingness.’ Willingness is our innermost flame of momentum, the builder that builds our dreams. With willingness we have momentum and with momentum, we can do magic. Momentum begins well before it can be seen by others, let it rise up, let it carry you up and without restriction, let it inspire others to do the same.

That’s my story, my song which began deep within me when I needed it, it helped me sing, it helped me rise above and beyond my conscious measures to become the best I could be, I hope these private words that I have now shared help you find your best beyond the restriction of other people’s perceptions and realities, no matter how well intended.

Surgery as a curative option

If your cancer has already spread beyond its primary point of origin, this is called Metastasis and will in most cases remove curative surgery as an option, which further increases the importance of knowing your mutations.

The majority of Cholangiocarcinoma diagnoses do not qualify for surgery.

You must be certain that you do or do not qualify for surgery.